Sometimes, people ask about the efficacy of Vegan Outreach's Adopt a College. Obviously, we can't track booklet recipients over time, but we can watch the larger trends.

Bon Appétit has noticed an upswing in the number of students who say that they are vegetarian or vegan.  The company manages more than 4,000 corporate, college and university accounts.

In a 2005-2006 feedback survey among college students at campuses that Bon Appétit oversees, an average of 8 percent said that they were vegetarian, and less than 1 percent identified themselves as vegan. The 2009-2010 survey, however, had very different results: 12 percent identified themselves as vegetarian and 2 percent said that they follow a vegan diet. 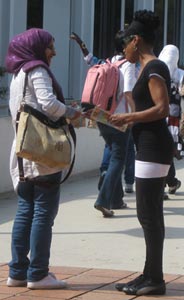 This is a 50% increase in vegetarians in just four years -- and a doubling of vegans!

As always, congratulations to everyone who makes this possible: the donors printing the booklets, and the activists -- such as Naimah Abdullah, shown here at Clemson -- getting these booklets into the hands of thousands of new people every day!!


Please consider promoting this post, and sharing the good news. Thanks!